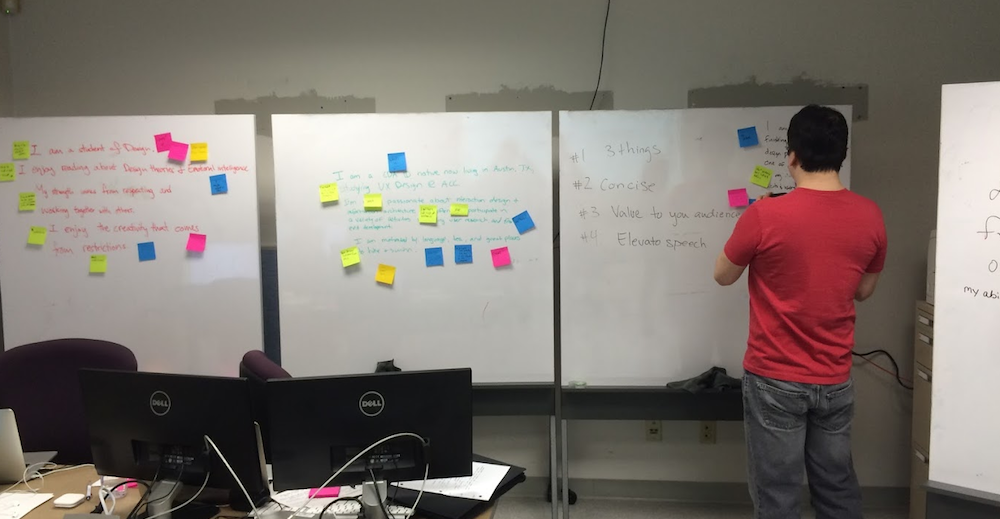 If you are considering a career in design, there are a number of options. For those who take the traditional route, they may choose a school with an established design program. In my case, I decided on the community college option for the foundation of my *career shift to UX.

When I was about to finish my portfolio class, I asked a more experienced designer, “compared to candidates from a well-known design schools, do you think coming from a community college will put me at a disadvantage?” He answered, “good creative directors will judge you on your level of work not your resume.” Was he right? It is nearly five years after that conversation. I have outlined the situation that lead me to take the community college option and summarized the takeaways on my experience that followed.

In a past life, I taught English to Speakers of Other Languages. This helped fund living overseas for my wife and me after college. When we finally decided to return to the U.S., we quickly realized that jobs for English teachers were few and poorly paid. Our skill sets also seemed ill-suited for anything else besides odd jobs.

After a lot of failed job interviews, we decided that we needed to leave teaching. Design was a longtime interest that I explored on side projects in the past. I eventually concluded that I would pursue this career path.

Thankfully, Austin Community College (ACC) had a budding **UX program. The courses were affordable to try. Many of the classes were either at night or online. I could still work and pay for school.

Self starting and uncovering opportunities

The benefits of an affordable community college program also brought challenges. The level of expectation was low. Handing in work on-time was the only major requirement. To improve my skills, I had to find and shadow the 1% of students who had experience with design aesthetic. It was that small group that shared blogs, books, meet-ups, and job leads.

As a newly minted designer, I faced the reality that experience is king. Most employers did not want to take a chance on someone with just student work. The employers, who will train recent graduates, usually get the pick of the litter. That meant that I had to start at the bottom with a company who just needed someone to push pixels. It took me nearly five months to find that job at the bottom.

As I was building up my experience at these companies, I received the best advice of my career. My first creative director, who is actually my current manager at IBM, advised me to do as many side projects and freelance work as possible. He said, “you’ll learn here (at work), but you’ll learn tons more with those outside projects.” Those added skills helped my output as far as quality and speed for my 9 – 5, and they set me up for exciting opportunities with future positions. I would not have been able to move from a Web and Graphics position to a UX designer role if I had not done side projects.

There was value from the community college option. However from my experience, I found that I had to apply to more jobs to get that first design role. Then it was up to me to invest the extra time to build skills that made me more competitive. Eventually, I worked my way up to a point where potential employers did mostly judge me by the quality of my work. The truth was that it took nearly five years after graduating to create a body of work that compared with graduates from more reputable schools.

*For the sake of disclosure, I was a student at Austin Community College (ACC), and I currently teach design at the same program. Some of my views reflect this experience. Plus, I should point out that ACC may not be the norm when it comes to design programs at the community college level. Most of the programs I found during my research for this post focus on graphic design. ACC has been developing two tracks. One is for students who want to study traditional print and advertisement. The other one is for UX. I graduated and returned to teach in this one.

**The degree program only in 2016 recently refocused to a A.A.S UX Degree.

Researching and writing articles, talks, and books (comming soon) takes time and resources. You can support the work here through buymecoffee.com